The cherry tree above is a street tree in a nearby town, shown here in full bloom - it was providing food for loads of bees - the hum was audible! Also the native bird Tui - there were several feeding, but it wasn't easy to capture them on my cellphone camera.

We've been reasonably busy outside. G has planted lots of trees and flax which has also involved a lot of mowing and weed-eating. I have been tackling the overgrown vege garden beds when time permits, digging, weeding and putting on compost and mulch. Always so much to do and so little time! 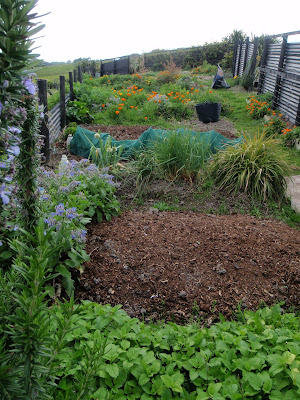 You'll notice the orange flowers to the right, these are calendula (pot marigold) which self-seeds freely. I don't mind that as I use the flowers and they feed the bees, but the lemon balm in the foreground..hmm..it's lovely BUT will pop up everywhere given a chance and is invasive like mint. I think I might dig it all up and grow it in a large pot instead of the garden. Also self-seeding is the Iceland poppy (orange flowers in top/middle of picture), and borage (blue flowers). Periodically I get brutal and rip up these, which is a shame for the bees, but I need growing space in the garden! I've moved the blueberries to a better spot and they seem to be doing well. Also had to dig up the hop bines which were along the fence to the right. Thought that was a good spot originally, but they also get quite invasive, the roots spread quite a distance and put up new bines, great if I wanted it my own brewery, but I really only want them for craft (sleep pillows and floral decorations) and maybe the odd batch of homebrew. So these came out and now I have to figure out where to plant them where they won't create any problems..and of course they need some kind of structure on which to climb.

A few other photos from the garden:


In the citrus orchard we've harvested a good amount of lemonades (a type of lemon) off our small tree and the Rangpur limes are doing well as usual. I've taken a few lemons off the other trees too (Yen Ben is one variety). We also got a few grapefruit this year. The 'Cutlers Red' were particularly tasty:

I juiced up a few of these and the juice was delicious. The lemonades will also get juiced and the juice frozen for later use. We enjoy homemade lemonade in the summer months and it will be a lot easier to make it with the juice already at hand.


The clay bank is looking a bit more presentable, filling out with plants and flowers. I'm not sure about the geraniums, as pretty as they are they do tend to get quite woody. I think they are better in pots, Mediterranean style. On the plus side they take really easily from cuttings. A while back I planted a hedge of lemon scented geranium (pelargonium), which have not proved to be a good choice, especially with my lack of care with pruning..Now they are all coming out and G is going to replace them with a hedge of Griselinia (kapuka - a native shrub with glossy green leaves). The daisy flowering plants to the left are doing great at covering the bank though, so I will definitely divide these and continue planting along the rest of the bank.

Right better go outside and get planting!
Posted by Cabbage Tree Farm at 10:16 AM 3 comments: