My first attempt at homemade sausages

After much procrastination I finally got around to making sausages. A few months ago we bought a meat grinder with a sausage making attachment and I had a bit of a hiccup with getting the correct type of skins - I bought edible collagen casings which did not fit on the end of the sausage maker....oops! Finally I tracked down a butcher that could supply the natural 'hog' casings (pig intestines) and we had some pork scraps that our butcher bagged up specifically for us to make sausages, from when he butchered our last lot of home raised pigs.

I did a quick search on You Tube to make sure I knew what to do, and to get some recipes. In the end I chose to make up some chorizo sausages after watching this helpful tutorial.

I was quite pleased that they came out looking like sausages should!! 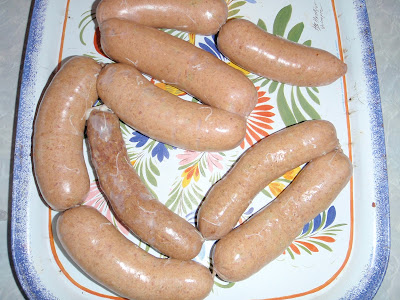 However I think it should be noted that next time they need just a bit more fat in the mix as they were a little on the dry side - although they may also have been slightly overcooked. As our butcher had already supplied the necessary bits of meat, I didn't have any ability to add more fat, but will be sure to ask him next time to supply some extra to add in as and when.

With the remaining meat (I had 2kgs in total), I made another lot of sausages, and had 2 helpers which made it a lot easier. This time I made pork and apple sausages loosely based on this recipe, which were very nice, and not quite so dry.

All in all, the process was quite easy and not terribly time-consuming and the best part was having lovely fresh sausages without all the nasty ingredients added in most shop-bought ones. I am looking forward to trying out other recipes.

Any fellow home sausage makers out there? What kind(s) of sausage do you make?
Posted by Cabbage Tree Farm at 9:02 AM

Oh relish! We've had our sausages made for us recently from a local butcher who has a really fine chop attachment, meaning he doesn't have to add any meal to it. Hubby seems to get worse arthritis symptoms when he eats starch so no meal allowed. And they were good, but not perfect. One day I might have a go at making my own and getting them just right.

Yes it seems to be that if you want to avoid MSG in most sausages you have to opt for the 'gluten-free' ones with no breadcrumbs. The chorizo ones I made didn't have these and were slightly crumbly in texture, while the pork and apple had a much better texture. Still a little hard to compare without the extra fat needed. I guess practice - and a good recipe - makes perfect!

Oh wow - they look amazing! I've always wanted to try and make my own sausages and you may have just given me the inspiration to try! :-) When I do get round to giving it a go, I might try pork & leek (they are our favourites). Kirsten x

You clever lady you!!! they look wonderful. Hope you are trying to stay dry the weather is awful right now. Have a lovely weekend.

Love to you all
Liz

Yes have been indoors all day, watching the curtains of raining blowing across the paddocks, quite spectacular, but not so nice going out to feed the pigs!!
Hope your back is a lot better now.
Bridget

I've hidden today as well. Animals though had to be fed. Back is a lot better now. I'm straight again!